END_OF_DOCUMENT_TOKEN_TO_BE_REPLACED

Freedom Party received an e-mail from a graduate student, K, who wrote, in part:

As a scientist-in-training, I applaud your party’s commitment to reason and in particular your suggestions to separate religious practice from schooling. However, I take issue with your party’s stance on pesticides.

There are two problems I have with this. The first is that it’s one thing to let people expose themselves to whatever toxic substance they wish, but nobody has a solid wall around their property that blocks windborn movement of pesticides, or insects (whose good health is important to birds, pollination services, and many small mammals). Consider it like having a neighbour blaring loud music at all hours of the day: their right to play loud music doesn’t override your right to be able to enjoy your property (including having a good night’s sleep).

The second I have is an issue of onus. While you argue that it is irrational to ban something that hasn’t been proven to be unsafe, I would argue the opposite: the onus is on government to regulate items that are not necessary (and really, a green lawn is not particularly necessary to one’s survival, ability to hold down a job, or have a family) that cannot be proven to be safe and impact everyone around them. Think of it like recreational drugs: I think it’s any one person’s (of age) choice to take recreational substances, but I don’t think people have the right to smoke indoors at their workplace where other people are forced to also consume that drug.

Toxicology is an immensely complicated science (and I’m appalled at the difficulties researchers in that field have with obtaining funding). And the tricky part about it is that testing on pregnant women or small children is unethical. But I think just because something hasn’t been proven to be safe, doesn’t mean it is. And we need to balance the benefits that item brings us versus the potential costs–I don’t think a green lawn is really more important than our health.

Anyway, I’m happy to hear what you think!

I replied as follows. END_OF_DOCUMENT_TOKEN_TO_BE_REPLACED

I was recently asked: “What is the Freedom Party’s plan for creating jobs?” It’s a question commonly asked of all parties. What follows is one of my answers. END_OF_DOCUMENT_TOKEN_TO_BE_REPLACED

This audiobook places each plank in a separate chapter, for ease of navigation. Compatible with Apple iTunes, iPhone/iPod/iPad, and other smart phones/tablets. END_OF_DOCUMENT_TOKEN_TO_BE_REPLACED

April 19, 2011 – Radio Interview: Freedom Party leader Paul McKeever was a guest of the John Oakley Show (AM 640 Toronto). The topic: Dalton McGuinty’s ban on herbicides and pesticides, and Freedom Party of Ontario’s promise to eliminate the ban. Click here to listen.

“On April 22, 2009 (Earth Day), Premier Dalton McGuinty’s Liberal government introduced a ban on a wide range of lawn and garden herbicides and pesticides. A 2011 election plank released today by Freedom Party of Ontario calls for the elimination of the ban…” Click here to read the full media release. 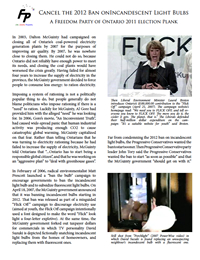