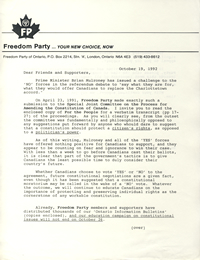 DESCRIPTION:
Two-sided Freedom Party of Ontario flyer. A personal message from Ray Monteith – Freedom Party’s then Elgin candidate – concerning the October 26, 1992 referendum on the Charlottetown Accord.

On October 26, 1992, two referendums, the Quebec government’s referendum in Quebec, and the federal government’s referendum in all other provinces and territories, were put to the voters. The referendum asked: “Do you agree that the Constitution of Canada should be renewed on the basis of the agreement reached on August 28, 1992?”. Fifty four point three percent (54.3%) of those who voted voted “No”. END_OF_DOCUMENT_TOKEN_TO_BE_REPLACED 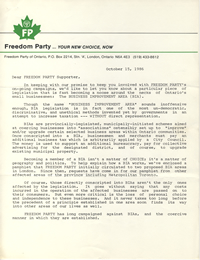 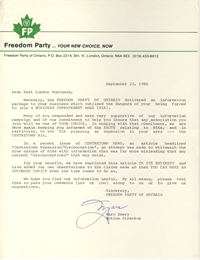 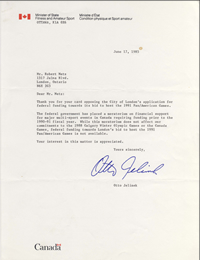 Freedom Party’s No Tax for Pan Am Committee had distributed cards to Londoners which they could sign and send to Jelinek, asking that the games not be funded with federal tax revenues. Jelinek replied Robert Metz’s card with this letter, advising that there would be no federal funding for the games. END_OF_DOCUMENT_TOKEN_TO_BE_REPLACED 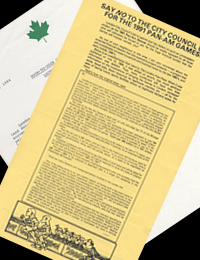 Description:
In the summer of 1984, Freedom Party Action Director Marc Emery wrote a letter to the editor of the London Free Press opposing taxpayer funding for London, Ontario’s City council’s bid for the 1991 Pan Am Games. It was so heavily edited by the paper, that Emery decided to print 20,000 copies of a letter. With Freedom Party co-ordinating 15 volunteers, the letter was delivered door-to-door to Londoners. It would mark the beginning of a Freedom Party campaign that, in June of 1985, met with success. This scan of the original newsletter includes a media release that was sent along with the letter on July 23, 1984. END_OF_DOCUMENT_TOKEN_TO_BE_REPLACED