AUDIO – DESCRIPTION:
On August 13, 1986, Ontario Progressive Conservative Party leader Larry Grossman was the guest of the Wayne McLean show. Grossman fielded calls from listeners, including Freedom Party president Robert Metz who challenged Grossman to clarify his position on the injustice or justice of a law that punishes a person for opening his or her retail store on a Sunday. Grossman was in favour of the law as a matter of tradition, but also said he was in favour of making exceptions based upon race (e.g., Chinatown, which laid within his own electoral district), business type (Grossman said he would exempt bookstores, and arguably he did so because the constitutionality of Ontario’s Retail Business Holiday’s Act was being challenged by a Toronto bookseller Edward’s Books and by Toronto furrier Paul Magder, whose fur business was located in Chinatown, in Toronto), and other completely arbitrary things. When Grossman says he doesn’t know how to solve the apparent injustice of allowing store owners in Chinatown to open their stores while other store owners are charged and lose their business to competitors, Metz argues that market forces, not government force, provide the solution.

END_OF_DOCUMENT_TOKEN_TO_BE_REPLACED 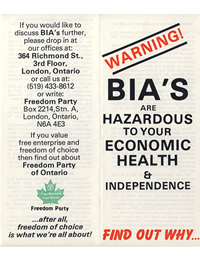 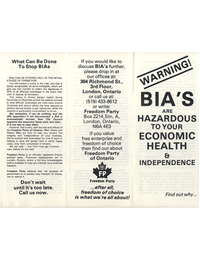 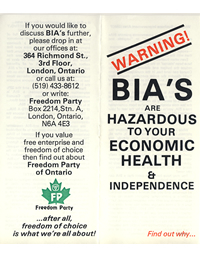 Flyers used during Freedom Party of Ontario’s long campaign, during the 1980s, against Business Improvement Areas. At least 3 versions have been found in the archives. All three are available here. END_OF_DOCUMENT_TOKEN_TO_BE_REPLACED