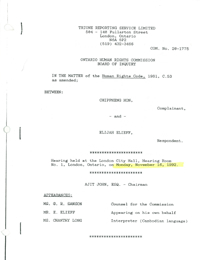 Description:
On November 16, 1992, an Ontario Human Rights Commission Board of Inquiry commenced a 10 day hearing in the matter of Chippheng Hon v. Elijah Elieff (COM. No. 20-1775). Hon was a tenant of Elieff’s apartment buildings. Hon was originally from Cambodia, and Elieff was originally from Macedonia. Each had difficulties with the English language. In her complaint to the Ontario Human Rights Commission, Hon alleged that Elieff had subjected her to harassment due to her “ethnic origin”. Although her complaint was initiated in 1989 – three years before the hearing began – counsel for the commission was allowed to add “race” as a basis of harassment on day 1 of the hearings. She was also permitted to add as a respondent the owner of the apartment buildings, which was not Elieff, but a corporation in which Elieff was a shareholder. Freedom Party president Robert Metz took an interest in the hearings, which were being held in London, Ontario, so he attended them. He quickly grew concerned by what he witnessed. On the fifth day of the hearings – February 2, 1993 – Metz was acknowedged by the Tribunal to be Elieff’s agent. Ultimately, largely thanks to Metz’s assistance, Elieff was found by the Tribunal not to have discriminated against Hon or his other Cambodian tenants. Along the way, Metz uncovered what can only be called a conspiracy that was an attempt to use a human rights complaint as just one part of a campaign to smear and financially ruin a landlord so that another entity affordably – and with taxpayer money – could take-over his buildings. It is a story that involves a local politician, a daily newspaper, and a major organized religion…and it’s all evidenced by the transcripts of the testimony of those involved.

These are transcripts of the proceedings of all 10 days of the Board of Inquiry’s hearings of the matter, as recorded by the official court reporter in the matter. In Freedom Party’s physical archive, the transcripts are bound together in two binders or “books”.
END_OF_DOCUMENT_TOKEN_TO_BE_REPLACED