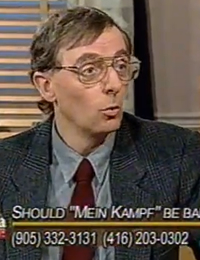 VIDEO – DESCRIPTION:
On November 30, 2001, Robert Metz (President, Freedom Party of Ontario) was a guest of Rhonda Live. In this episode, Metz discussed with host Rhonda Glenn a decision by Heather Reisman (head of the Chapters and Indigo bookstore chains) no longer to sell Adolf Hitler’s “Mein Kampf” in her stores. Also a guest in this episode: Manuel Prutschi (Canadian Jewish Congress). END_OF_DOCUMENT_TOKEN_TO_BE_REPLACED 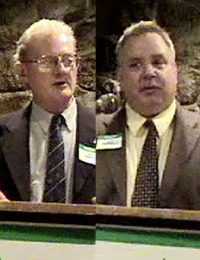 Following the terrorist attacks of September 11, 2001, and the commencement of war in Afghanistan (starting October 7, 2001), Freedom Party held an informative dinner in London featuring two experts, Dr. Kenneth Hilborn (Professor Emeritus of History at the University of Western Ontario) and John C. Thompson (Executive Director of the Mackenzie Institute). This video commences with a brief contextual overview of the events which preceded the dinner. Note: expletives have not been “beeped” out of the footage, and some may find some of the images in the overview – including the bombing and collapse of the World Trade Towers – to be disturbing. Govern yourself accordingly. END_OF_DOCUMENT_TOKEN_TO_BE_REPLACED 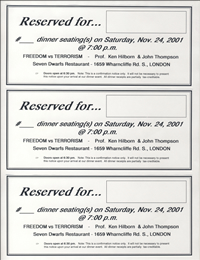 DESCRIPTION:
Confirmation of purchase of reservation to Freedom Party’s November 24, 2001 “Freedom vs. Terrorism” Dinner at the Seven Dwarfs Restaurant in London, Ontario. Mailed to attendees via Canada Post. END_OF_DOCUMENT_TOKEN_TO_BE_REPLACED

On November 20, 2001, Freedom Party of Ontario notified the media that Freedom Party would be hosting a dinner in London, Ontario with the theme “Freedom v. Terrorism”, and with guest speakers Kenneth Hilborn and John Thompson. 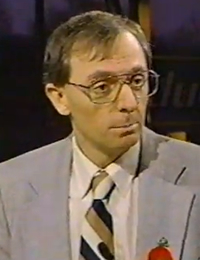 VIDEO – DESCRIPTION:
On November 3, 2001, Freedom Party of Ontario president was a panelist – along with Gord Harris (News Director, Corus Entertainment), Megan Walker (Executive Director, London Abused Women’s Centre), Greg Van Moorsel (London Free Press) – on Inquiry. The topics discussed included: a woman found not guilty of abducting her three children and taking them across the border; millions in provincial spending announced to make our homefront more secure in light of the September 11, 2001 attack; Ontario’s Bill 30 (formerly Bill 155): provincial asset forfeiture legislation; charities at home being left without contributions due to contributions to the victims of 9/11; Ontario’s approaching election, including the health care issue. END_OF_DOCUMENT_TOKEN_TO_BE_REPLACED