AUDIO – DESCRIPTION:
It’s the beginning of 1988. The Retail Business Holiday’s Act – introduced by Ontario’s Progressive Conservatives in 1975 – bans the opening of most retail stores on Sundays (although the Ontario PCs deny the reason, the fact is that the Lord’s Day Alliance – an alliance of 4 Christian religions – asked Premier Bill Davis, in 1975, to keep the Lord’s Day holy by imposing a ban). However, Canada’s Supreme court has already struck down (in 1985) a federal Lord’s Day Act that did the same thing, pursuant to the then-new Canadian Charter of Rights and Freedoms. Although the Ontario legislation has survived (in 1986) a similar constitutional challenge, there is growing public support for ending the ban on Sunday Shopping (in no small part due to Freedom Party’s ongoing campaign to end the ban on Sunday shopping). Feeling the political head, Ontario’s governing Liberals have announced that they will be introducing legislation in 1988 that will give Ontario’s municipalities the power to decide whether or not Sunday shopping is banned within their respective municipalities.

And so, as the tabling of new Sunday shopping legislation approaches, on January 22, 1988, AM 980 (London)’s Talkback program asked callers to call in their views on the Sunday shopping ban. Four Freedom Party personalities called in: Freedom Party Action Director Marc Emery, FPO supporter Dave Southen, FPO Vice-President Lloyd Walker, and FPO president Robert Metz. You can hear the whole program, or listen to their respective calls, below.

END_OF_DOCUMENT_TOKEN_TO_BE_REPLACED 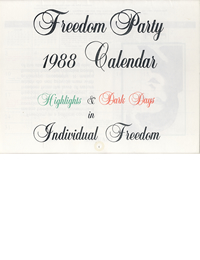 Description:
In 1987, then Freedom Party of Ontario Action Director Marc Emery commenced his research into the history of individual freedom, for the purposes of creating a 1988 Calendar of Individual Freedom that would be printed and sold by Freedom Party of Ontario. The calendar featured a number of historical events that, in Emery’s opinion, constituted either “highlights” or “dark days” in the history of individual freedom. It also featured a two page centre-fold of author/philosopher Ayn Rand. The release of the calendar met with critical acclaim, both locally, and among recipients including Milton Friedman, who was one of the people featured in its pages. END_OF_DOCUMENT_TOKEN_TO_BE_REPLACED