END_OF_DOCUMENT_TOKEN_TO_BE_REPLACED

At the July 10, 2011 meeting of the Freedom Party of Ontario Provincial Executive, former FPO Officer Robert Vaughan was re-elected to the executive, and now serves as an Officer of the party. As such, he once again becomes a guardian, as it were, of the party’s guiding principles and policies. Welcome back Robert!

At the same meeting, Tim Hodges – a long-time FPO member, committed supporter, and seemingly unstoppable party volunteer/worker – was appointed a member of FPO’s Provincial Council. As such, he is now eligible to chair party committees set out in the party constitution, and to run for election to the Provincial Executive. Congratulations Tim! You certainly deserve it.

To all members and supporters, I will just add: we are all very lucky to have Robert and Tim. Be sure to send them your best wishes and congratulations. 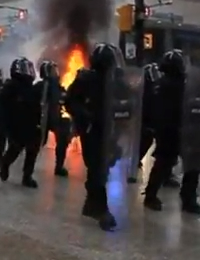 Transcript: “Before the mass arrests. Before the claim that this isn’t Canada anymore. [Officer: “This ain’t Canada right now”; Pedestrian: “This isn’t Canada right now?” Officer: “No.”]. Before McGuinty’s secret five-metre rule. [Officer: “You’re within five metres of this wall so please turn off your video camera.”] Before the burning cars and broken windows, there was the decision to hold a politically explosive event in a city of millions, at a cost of billions. A Freedom government will require international political meetings to be held in remote locations, not in our cities. Keeping the peace safely and affordably: Freedom Party.” END_OF_DOCUMENT_TOKEN_TO_BE_REPLACED 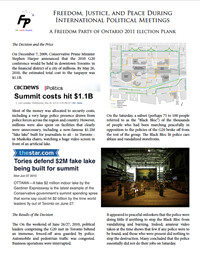 “Ontario’s Liberal and Progressive Conservative parties have opposed the commissioning of a judicial inquiry into the actions of Ontario’s Liberal McGuinty government and into the actions and omissions of the policing of the G20 event held in Toronto in 2010. In a 2011 election plank released today by Freedom Party of Ontario, the party says that a Freedom government would commission a judicial inquiry. The party also pledges that it will refuse to cordon-off public streets and sidewalks in Ontario’s cities, and will refuse to pledge police resources in response to proposals to hold international political events in Ontario’s busy, populated areas. All such events will have to be held in secure, remote locations…” Click here to read the full media release.

END_OF_DOCUMENT_TOKEN_TO_BE_REPLACED

July 5, 2011 – Radio Interview: Freedom Party leader Paul McKeever joined the John Oakley Show (AM 640 Toronto). The topic: a Toronto middle school that is allowing an Imam to lead a prayer service for muslim students, in the school’s cafeteria, every Friday. Click here to listen.