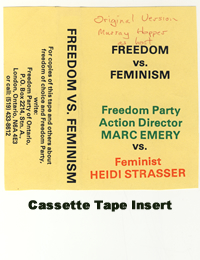 In 1985, Heidi Strasser was a London area radical feminist and a representative of the London Status of Women Action Group (LSWAG). In the early eighties, LSWAG ran campaigns to ban or otherwise censor the wide range of things it considered “pornography”. As a result, in those years, pornography “dominated the news” in London (in the words of then talk radio host Wayne McLean).

On May 3, 1985, McLean dedicated two hours of his radio program to the issue of feminism versus individual freedom. His guests were Strasser, and then Freedom Party of Ontario Action Director Marc Emery, who opposed censorship.