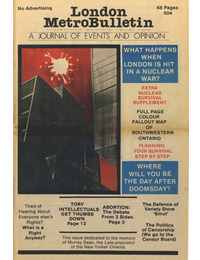 SPECIAL DOOMSDAY SURVIVAL SUPPLEMENT: Life and death when nuclear war comes to London; How nuclear war will likely happen; What is a nuclear weapon?; Sounds bad? You can survive!; All you ever needed to know about fallout [but were afraid to know]; How to make your own fallout filter and pump; Survival in your shelter; Emerging into your new world; Is London a target?; What can you do to help avert war and ecological disaster?; Civil defence; Myths and falsehoods of nuclear weapons; Glossary; How to make the Kearny fallout meter; Appendix; Fallout map of Southwestern Ontario. END_OF_DOCUMENT_TOKEN_TO_BE_REPLACED