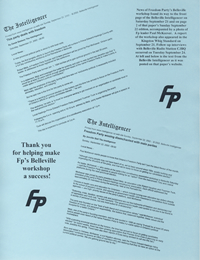 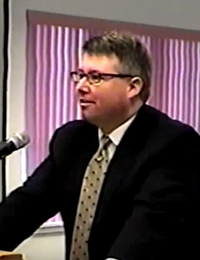 On September 21, 2002, Freedom Party of Ontario held its first Constituency Association workshop, for the riding of Prince Edward-Hastings, in anticipation of the 2003 provincial general election. It was the first public meeting held since the party’s adoption of its first official constitution and statement of policies (as opposed to election platforms), and since the launch of the new FPO website, www.freedomparty.on.ca (form 1996 to 2002, the party’s official website had been located at www.freedomparty.org, which thereafter became the official website for Freedom Party International, which is not an electoral political party but an educational arm of the organization). After an initial speech by FPO’s education critic, Robert Vaughan, party president Robert Metz provided attendees with a history of the party, and Paul McKeever gave his first public speech as the party’s new leader. END_OF_DOCUMENT_TOKEN_TO_BE_REPLACED 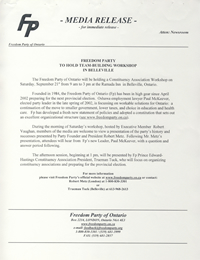 On or about September 20, 2002, Freedom Party of Ontario notified the media that Freedom Party would be holding a team-building constituency association workshop in Belleville on September 21, 2002 (in the riding of Prince Edward-Hastings).