AUDIO – DESCRIPTION:
On January 24, 1985, AM980’s Sports Call program interviewed Freedom Party Action Director Marc Emery to understand the case against the London bid committee’s bid to host the 1991 Pan Am Games. After explaining that we oppose the bid because it sticks the taxpayer with a hefty bill for the games, the show interviewed Darwin Semotiuk of the London Bid Committee.

END_OF_DOCUMENT_TOKEN_TO_BE_REPLACED

AUDIO – DESCRIPTION:
On January 23, 1985, CHRW 94.7 FM’s “Forum” program interviewed Freedom Party Action Director Marc Emery about the London bid committee’s bid for London to host the 1991 Pan Am Games at taxpayer expense. Emery and Freedom Party’s No Tax for Pan Am Games Committee opposed the bid on the ground that it would leave taxpayers footing the bill to host the games, and to pay for the white elephants left behind.

END_OF_DOCUMENT_TOKEN_TO_BE_REPLACED 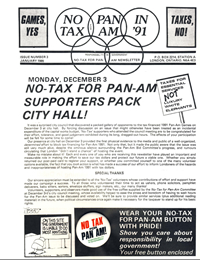 Contents:
No-tax for Pan-Am supporters pack City Hall!; Special thanks; What are we trying to accomplish; Big money in product endorsements by Canadian Olympic medallists; More Olympic pools swimming in debt; Our mistake; Pan-Am Games could be held in London-southwestern Ontario without building expensive white elephants; Promises promises; Expo ’86 – another fine mess they’ve gotten us into; Letter to the editor. END_OF_DOCUMENT_TOKEN_TO_BE_REPLACED 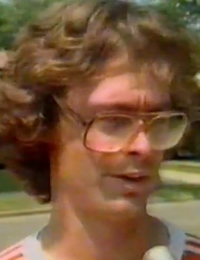 In this TV London News newscast from late 1984 or early 1985, it is reported that London, Ontario’s Pan Am Games bid committee – committee of London businessmen and others who are trying to get the city to pay (with tax revenues) for a 1991 hosting by London of the Pan Am Games – is reducing the size of its bid. The report speculates that a reduction of the amount sought by the committee may be in response to the expansion of the No Tax for Pan Am Games Committee’s efforts to inform Londoners about the costs and the over-stated benefits of making taxpayers foot the bill. The No Tax for Pan Am Games Committee was led by Freedom Party of Ontario president Robert Metz, and worked in conjunction with the efforts of Marc Emery, who spearheaded the opposition effort. Emery, at the time, was a co-founder of Freedom Party, and was its Action Director. END_OF_DOCUMENT_TOKEN_TO_BE_REPLACED