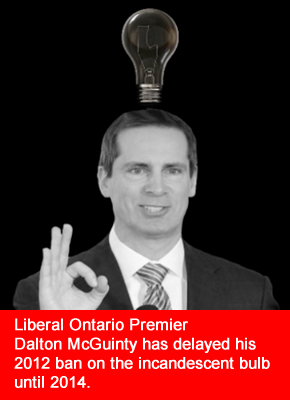 Freedom Party of Ontario’s 2011 election platform continues to effect public policy changes in Ontario. Among the party’s planks were proposals to eliminate the LCBO’s government monopoly on the distribution of liquor, and to end the McGuinty government’s planned 2012 ban on incandescent light-bulbs. As is reported below, Freedom Party, its candidates, and its supporters have reason to cheer and to renew their optimism, because partial victories have been achieved on both fronts.

On May 17, 2011, Freedom Party released its election plank on the LCBO. It argued, in part, that the LCBO’s government-imposed monopoly gives it the power to ban the sale of products for reasons of political correctness, and that allowing competition would allow other stores to carry even products that the LCBO decides not to offer on its shelves. Freedom Party highlighted two examples. Dan Aykroyd’s Crystal Head Vodka (a premium vodka, made in Newfoundland, that comes in a clear glass skull-shaped bottle) had been refused an LCBO listing in 2010. 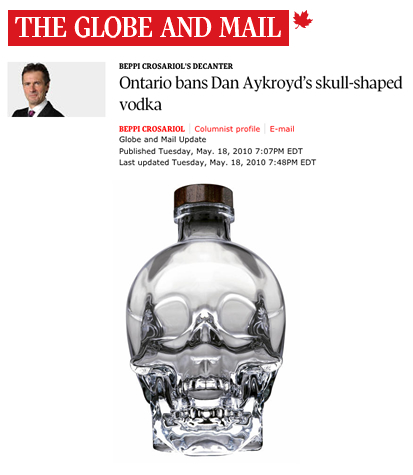 On March 25, 2011, the Flying Monkey’s Brewery in Barrie, Ontario informed readers of its facebook page that the LCBO had refused to carry their Smash Bomb Atomic India Pale Ale.

The LCBO refused to sell these products due to their alleged death and violence themes. 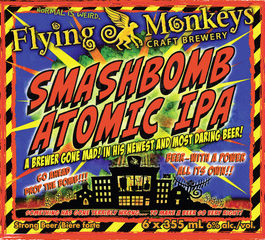 On May 17, 2011 Freedom Party of Ontario released a three-part commercial on its YouTube channel that informed the public about the situation and about Freedom Party’s LCBO election plank.

The plank got traction on major talk radio in Toronto. The Jim Richards Showgram (NewsTalk 1010 AM, Toronto) highlighted the plank in May of 2011. Two months later, the LCBO quietly announced that it had ended its ban on Smash Bomb Atomic IPA, and would slowly spread its distribution through LCBO stores over time (I noticed it on my local LCBO’s shelf only last week).

Freedom Party continued to promote its LCBO plank during the September/October 2011 election – the party even ran commercials on Sun TV – that brought the party a lot of headlines, including coverage specifically about the party’s LCBO plank. 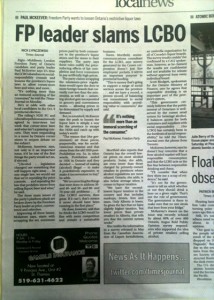 On October 7, 2011 – one day following the Ontario election vote – Ryan Doyle and John Downs continued to tackle the issue on their program Friendly Fire (NewsTalk 1010 AM, Toronto). On October 18th, 2011, the Globe and Mail reported that the LCBO had finally reversed its decision on the ban of Crystal Head Vodka. Crystal Head’s Dan Aykroyd said that his company did not lobby the LCBO to end the ban. He explained the cause of the LCBO’s reversal as follows:

The public basically started a kind of letter-writing and Web campaign to ask why it was not available. The consumer really pulled it through for us.

Look for both products in an LCBO near you soon, if they aren’t there already.

What do the LCBO’s policy reversals on these products really mean? Freedom Party stood (and still stands) alone in calling for the LCBO to be exposed to private sector competition. Clearly, by banning the products, the LCBO made it possible for Freedom Party to turn public opinion against a monopoly, and in favour of allowing competition for the LCBO. The LCBO has listed these products so as to give the likes of Freedom Party fewer ways to justify its demand for an end to the LCBO’s monopoly status. Freedom Party was able to push an elephant with a pen, simply by crafting the right message, and it will continue to do so until a free market for liquor distribution exists in Ontario. Congratulations to all who helped make that the case, including FPO’s candidates, and the media.

On April 18, 2007, the McGuinty government announced that it was banning incandescent bulbs starting in 2012. That ban was released as part of a misguided “Flick Off” campaign to discourage electricity use during a time when industry had not yet been chased out of the province, such that Ontario sometimes had power shortages.

The power shortages were due to 4 years of foot-dragging by the McGuinty government, following decades of mismanagement by the provincial Progressive Conservatives. Rather than admit that it had bungled the energy file such that power shortages now made rationing necessary, the McGuinty government – and even the federal government of Conservative Stephen Harper – told the public that they were banning the bulb in 2012 so as to reduce CO2 emissions to fight “global warming”.

In February of 2011, Freedom Party released its 2011 election plan on ending the 2012 incandescent light bulb ban. On April 16, 2011, in the middle of the Canadian federal election, the Harper Conservatives promised to delay the 2012 incandescent ban until at least 2014. During the September/October 2011 election, Freedom Party of Ontario continued to promote its plank concerning the ending of the ban, including commercials on SunTV.

Finally, just two days ago, on December 21, 2011, Ontario’s Energy Minister announced that the McGuinty government was delaying its ban of the incandescent bulb to 2014 (See coverage by: CTV, Toronto Star, and Sunmedia). 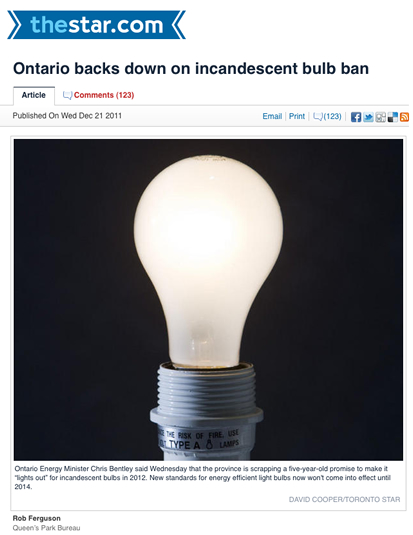 As with the LCBO issue, Freedom Party had stood alone in opposing the incandescent bulb. However, with the help of those who contributed money, time, and effort to the party, we were able to bring enough pressure to bear that both Canada’s and Ontario’s incandescent bulb bans have been delayed. Time will tell as to whether the bans will survive in 2014, but Freedom Party will keep up its opposition to the ban until the ban is gone for good.

In conclusion: take some time this holiday season to bask in the warm yellow light of an incandescent bulb, and to raise a glass of your favourite beverage in cheer as you look back on 2011 with the knowledge that Freedom Party and its supporters had an impact in 2011.