The Toronto Sun reported two days ago that an Oshawa-based group going by the name stop100.ca is pushing to have the posted speed limit changed from 100kph to 120kph on Ontario’s 400-series highways. The effort would appear to be a grass-roots response to Freedom Party’s 2011 election plank calling for that change. Freedom Party’s 120 kph speed limit plank was promoted not only through social media, but also in television commercials aired during election 2011 (see commercial below). END_OF_DOCUMENT_TOKEN_TO_BE_REPLACED

END_OF_DOCUMENT_TOKEN_TO_BE_REPLACED 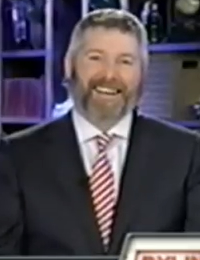 On September 20, 2011, during Ontario’s provincial general election, Freedom Party leader Paul McKeever was a guest of Byline (hosted by Brian Lilley on Sun TV). The appearance was prompted by September 15th and 16th comments by Lilley that Tim Hudak’s Progressive Conservatives are indistinguishable from Dalton McGuinty’s Liberals, and that there exists no viable alternative for “fiscal conservatives”. Viewers e-mailed Lilley to let him know he was wrong: for those looking for better governance in Ontario, there’s Freedom Party.

Lilley and McKeever discussed four of Freedom Party’s 18 election planks: 1. Separating Organized Religious Practice and Public Schools, 2. Allowing Beer and Wine to be purchased in Grocery and Convenience Stores, 3. Eliminating Ontario’s 14.7 cent per litre gasoline tax, and 4. Eliminating the beer tax (which will save beer purchasers as much as $5.76 per box of 24 beer). END_OF_DOCUMENT_TOKEN_TO_BE_REPLACED

This election commercial was aired on Sun News Network during the Ontario general election of 2011 to promote the party’s 2011 election plank: Restore Sensible Highway Speed Limits.

This audiobook places each plank in a separate chapter, for ease of navigation. Compatible with Apple iTunes, iPhone/iPod/iPad, and other smart phones/tablets. END_OF_DOCUMENT_TOKEN_TO_BE_REPLACED

National Post / MSN Autos writer David Menzies has given the green flag to voting for Freedom Party of Ontario in the coming October 6, 2011 provincial election. Check out his excellent article: http://www.thepassinglane.ca/2011/06/whats-not-to-love-freedom-party-promises-to-raise-speed-limits-cut-gas-taxes.html 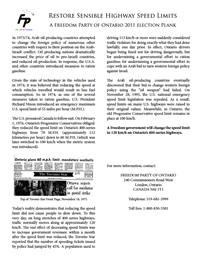