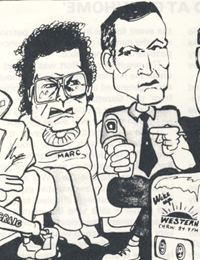 On October 19, 1984, in London, Ontario, revellers in the Gatewood Crescent area (most thought to be students of the University of Western Ontario) smashed beer bottles on the street and driveways, and urinated on lawns, gardens, and automobiles. Local residents found themselves virtually helpless against the collective onslaught of over 1000 party-goers. Despite police attempts to disburse the crowd by using tear-gas, verbal and physical onslaughts against residents continued into the hours of dawn. On a Wednesday (it’s not clear which Wednesday) in November of 1984, the radio station at the University of Western Ontario broadcasted a one-hour discussion about the Gatewood riot. Panelists included Freedom Party of Ontario’s Action Director, Marc Emery. Emery found himself having to pronounce explicit moral judgement against those who did not seem to have any regard for, or understanding of, the property rights of others.

NOTE: This recording was featured at pages 11 to 12 of Issue 4 of “Freedom Flyer”, the September to December 1984 issue of Freedom Party of Ontario’s official newsletter.