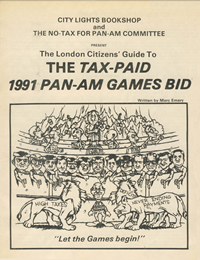 Description:
After Freedom Party distributed – to 20,000 Londoners – a letter from Marc Emery opposing taxpayer funding for London City council’s bid to host the 1991 Pan Am Games, Emery prepared a second document, which he titled “The London Citizens’ Guide to the Tax-Paid 1991 Pan-Am Games Bid”. Like the letter that preceded it, the second publication again was distributed by Freedom Party beginning on October 9, 1984 and this – the second version – was distributed beginning on October 17, 1984. In the guide, Emery described v. 2 of the guide as follows:

This is the second (and now, newly revised and updated) 1991 Pan-Am bid information package that I’ve prepared for my neighbours in London. Its purpose? To illustrate and voice my strong disagreement with the principle of tax dollars being used to host the event in London. To this end, I’ve examined city hall’s record of intervention in the realm of business, art, and culture, while always bearing in mind the many other projects city council is considering — or has already committed itself to.

NOTE: Another version of the “The London Citizens’ Guide to the Tax-Paid 1991 Pan-Am Games Bid” booklet was printed a little over one week earlier and distribution of that version started on October 9, 1984. Notably, the earlier version had been a City Lights bookstore public service (City Lights was Emery’s bookstore), whereas this second version was billed a public service of both the bookstore and the newly created (by Freedom Party) No-Tax for Pan-Am Committee, chaired by Freedom Party president Robert Metz. Both versions are available in this archive.