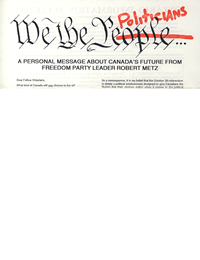 Two-sided Freedom Party of Ontario flyer. One side: “We the Politicians”, being a short essay or letter written and signed by Robert Metz. Opposite side: an Ontario Information Bulletin setting out Freedom Party of Ontario’s “conclusion highlights” drawn from Freedom Party’s assessment of the August 28, 1992 “agreement” in respect of the proposed “Charlottetown Accord” proposal for amending Canada’s constitution. Enclosed in the flyer: a postage-paid reply card.