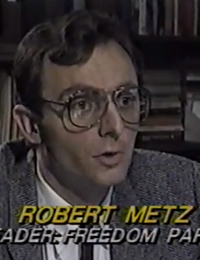 In August of 1987, Ontario’s election saw Global TV portraying Freedom Party of Ontario as a “fringe” party…a goal made easier by sandwiching a profile of the party between a profile of the communists, and a profile of the greens. The joke’s on Global though: although the report called Freedom Party’s election planks – including opposition to the Sunday shopping ban, censorship, and free trade – “not a quick ticket to Queens Park”, almost all of them have, long ago, come to pass.