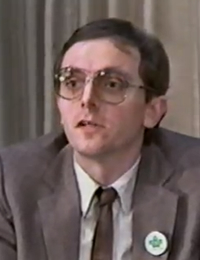 During the Ontario provincial election of 1987, the Registered Nurses Association of Ontario and the London Public Library co-sponsored an all-candidates debate for candidates in the London-area ridings. Among them was Freedom Party of Ontario president, Robert Metz.