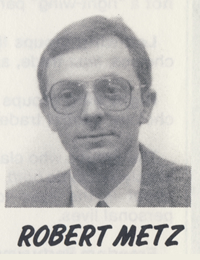 The Family Coalition explains that it was formed because of what Johnson called “anti-family” legislation, including the opening of abortion clinics, protection given to homosexual lifestyle, taxpayer funding for abortion. She says that young people should be encouraged to embrace chastity, adding “condoms are not the answer”.

Thereafter, Metz is asked about smoking, abortion, and laws to enforce alleged morality, and says that abortion is a personal choice and not something to be legislated about. He explains that Freedom Party is known for opposing the ban on Sunday shopping and censorship, and for supporting free trade. Barrie asks Johnson about the Metz/Freedom Party stand on censorship and Sunday shopping: she supports censorship to prevent pornography which, she says, harms to the family, as does abortion (she says).

Barrie then asks Metz about Freedom Party’s election planks and what laws he would like to see repealed or made. Metz responds that Freedom Party would like to see an end to Ontario’s Censor Board; freedom of choice in Sunday shopping; competition in labour and in business, which implies a repeal of recently-imposed pay-equity legislation and an end to corporate welfare; an end to taxpayer-funding for abortion without restricting the individual’s choice to have an abortion.

Barry asks Johnson what – other than ending protection for homosexuals, and imposing measures against abortion – her Family Coalition Party would like to see. She replies that her party is against pay equity legislation; would like to discourage universal daycare (her party wants government money to go, instead, to mothers so that they can stay home and raise her own children.

Barrie then returns to the phones:

In closing remarks, Metz explains that Freedom Party’s job is not to convert people who disagree with it, but to represent and bring together those who agree with it.