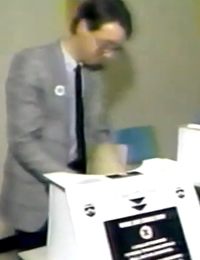 VIDEO – DESCRIPTION:
On March 31, 1988, voters in the riding of London North went to the polls in a by-election. Barry Malcolm was Freedom Party of Ontario’s candidate. In this polling-day news report, the four candidates who lived in the riding (two others did not) were shown casting their ballots for themselves