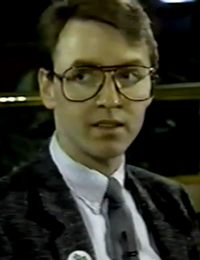 VIDEO – DESCRIPTION:
On March 28, 1988, during the Ontario provincial by-election for the riding of London North, five of the six candidates – including Freedom Party of Ontario’s candidate, Barry Malcolm – attended Ritchie’s Restaurant for a sit-down televised brunch. Arguably, the relatively unstructured discussion gave viewers a better opportunity to learn about each candidate, what motivates them, and what they are like as people.