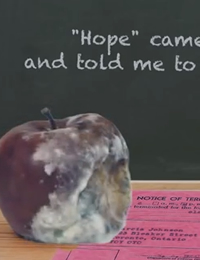 On May 26, 2014, Freedom Party released its “Making Ontario right again, for everyone” election ad, in anticipation of the June 12, 2014 Ontario general election. The commercial compares the offerings of Kathleen Wynne’s Liberals, Tim Hudak’s PCs, and Andrea Horwath’s NDP to that of the Freedom Party of Ontario.

[Voice of Kathleen Wynne]: “We’re gonna build on the work that Dalton McGuinty has done over the last nine years”.

[Voice of Paul McKeever]: “Actually, 72% of voters think it’s time for another party to take over governing Ontario. But who? Tim Hudak’s PCs are actually promising to put 100,000 Ontarians out of work”.

[Voice of Tim Hudak]: “Will it mean fewer teachers? It does.”

[Voice of Paul McKeever]: “Will destroying the lives of 100,000 families solve your problems? The NDP’s Andrea Horwath says she’s a socialist.”

[Voice of Steve Paikin]: “Are you a socialist?”

[Voice of Paul McKeever]: “If you give a radical the power to take money from your wallet, will that solve your problems? There’s a better option: Freedom Party. A Freedom government will restore trust in government by balancing the budget this year, and every year, without massive job cuts. We’ll pull the plug on overpriced, Liberal, green energy schemes. Together, we’ll make Ontario right again, for everyone.”