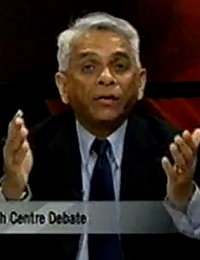 On May 16, 2014, candidates in the June 12, 2014 Ontario provincial election, in the riding of London North Centre, participated in a taped, televised debate. The debate included Freedom Party of Ontario’s candidate, Salim Mansur, as well as the candidates for the PC, Liberal, Green, and NDP parties.