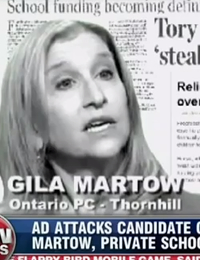 VIDEO – DESCRIPTION:
On February 10, 2014, Freedom Party released an ad concerning the anti-democratic views of PC candidate Gila Martow, who asserts that the public should not be permitted a vote when it comes to the taxpayer funding she seeks for private religious schools. This news item aired that day on Sun News Network’s “Battleground” program, hosted by David Akin.