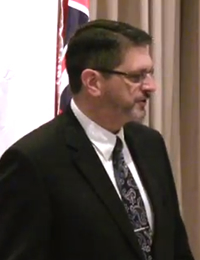 On October 27, 2012, Freedom Party of Ontario held its “3 Rs” dinner at the Primrose Hotel in Toronto. The video of the event was released in parts. This is Part 2: A speech by Stephen Anderson, Ph.D, a teacher at a high school in London Ontario whose article on moral relativism amongst the students in our schools, “Moments of Startling Clarity”, caught international media attention.