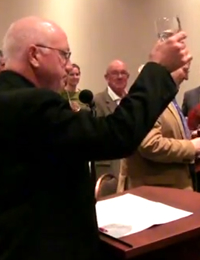 On October 27, 2012, Freedom Party of Ontario held its “3 Rs” dinner at the Primrose Hotel in Toronto. The video of the event was released in parts. This is Part 1: The Toast to Freedom that begins all Freedom Party of Ontario dinners. Also included is an introduction to the theme of the dinner: the implications of inculcating children with moral relativism in our public schools.