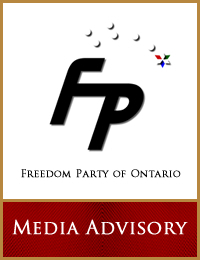 June 2, 2012 Toronto – Tomorrow, Sunday June 3, 2012, marks the twentieth anniversary of the defeat of the 85 year ban on Sunday shopping. Twenty years ago tomorrow, then-Premier Bob Rae announced that the ban was being repealed, effective immediately.

Though some will have forgotten, and others will deny it, Freedom Party of Ontario played a pivotal role in effecting the social change that made lifting the ban politically necessary. For that reason, the party has digitized much of its archival material, and is making it available to the public online, beginning today, at:

In Freedom Party’s Sunday Shopping Ban Archive, you will find compelling audio, video, photographic, and textual archival material on the history of the Sunday shopping ban, relating to the period 1906 to 1992. Freedom Party leader Paul McKeever has, for the occasion, produced and released a documentary titled “Never on a Sunday: The History of Sunday Shopping in Ontario” which can be viewed online at the Freedom Party archive site. Visitors to the Freedom Party archive site also can view original news clippings, committee presentations, and photos, and listen to talk radio programs and interviews from the tumultuous 6 final years of the ban. Freedom Party has even posted a Summons issued to Marc Emery, Freedom Party’s Action Director at the time, in relation to his trial for having opened his bookstore on Sundays to challenge the law: Emery was jailed for opening his store and refusing to pay the fine.