Ontario’s MPPs may have differing party colours but, for attendees to Freedom Party’s first dinner of 2012, one thing is perfectly clear: all of those MPPs are Red. Freedom Party filled the Starlight room on the top floor of Toronto’s Primrose Hotel last night where attendees heard speeches by the party brass and applauded as distinguished supporters of the party were given awards in recognition of their efforts.

After leading the dinner in the party’s long-standing toast to freedom, Freedom Party officer Robert Vaughan led with speech about the troubling state of laws and law enforcement in the Province. He explained that we increasingly are reversing cause and effect. Increasingly today, he explained, the results of civilization – including the mass production and duplication by millions around the world of things invented by a tiny few – too often are thought, erroneously, to be the cause of civilization. With numerous examples of failures by Ontario police to enforce objective laws, he explained that if we do not do a better job of making and enforcing objective laws in Ontario, we will suffer a fall from civilization, into an increasingly barbarous society.

Freedom Party president Robert Metz followed with a look at Ontario’s political parties. He likened the Ontario Liberal, NDP, and Progressive Conservative parties to red, orange and blue balloons. If one chooses to ride in the baskets of any of the three, Metz explained, one will quickly discover that despite the differing colours of the balloons, all three balloons will be blown in the same direction by a Red wind: leftward. In contrast, he said, freedom has no colour: it is clear, never obscuring the facts of reality. Freedom Party, he said, was like a great train, which the Red winds can never blow off of the rails – the philosophical principles – that guide it to a free society. Even if that train moves only an inch in an entire year, he explained, at least it will always have moved in the right direction, rather than being blown miles away in the wrong direction.

The party’s leader, Paul McKeever, wrapped up the talks with his Red Alert speech. He argued that Ontario is in the middle of a political war with two sides: the Reds, and everyone else. The Reds, he said, are those who resent the fact that nature requires an adult to expend effort, thinking and acting rationally to produce the material and spiritual values that make his survival and happiness possible. The Reds see everyone else accepting the facts of reality, and expending the effort, and decide to find ways to make the productive assume the role of parent, providing the Reds with a relatively effortless, childlike existence. McKeever warned against being a “Red for freedom”. He explained that just like cars, and homes, and rockets to Mars, freedom is a value that must be produced and maintained with a commitment always to exert rational thought and effort to support a political force for freedom. And, he said, if you do not make the earning of freedom as high a priority as the earning of cars, and homes and the like, you will soon discover that the Reds won’t allow you to keep those material goods for long. He asserted that whenever pessimism about the prospects for freedom creep into ones mind that one should not use that pessimism as an excuse to do nothing but, instead, should redouble ones support for Freedom Party.

Following the speeches, Metz awarded McKeever with a “Freedom 200” pin, a gold pin featuring Freedom Party of Ontario’s first logo. Awarded only at Freedom Party dinners, the pins are given to distinguished members, supporters, and others who have contributed to freedom and to Freedom Party. McKeever then assisted Metz in awarding 13 more “Freedom 200” pins to a number of distinguished guests, especially including the many who have served as Freedom party candidates in past provincial elections: Mary Lou Ambrogio, Andrew Brannan, Franz Cauchi, Brian Goodwin, Christopher Goodwin, Erin Gorman, Ted Harlson, Tim Hodges, Charles Olito, Matthew Oliver, Wayne Simmons, Andy Stivrins, and Douglas Thom. 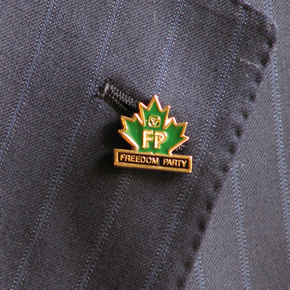 McKeever then presented plaques to particularly noteworthy individuals. On behalf of Freedom Party, McKeever presented Chris Goodwin and Erin Gorman with Freedom Party’s first two “Locomotive Awards” for their respective exceptional and successful efforts to recruit, motivate, and assist Freedom Party candidates and supporters in Election 2011. Paul Blair, a former officer and candidate and a current provincial councillor of the party, was awarded Freedom Party’s first-ever “Fireman’s Award” for his unyielding financial commitment to freedom’s success.

McKeever then called upon attendees Gary McHale, Mark Vandermaas, and Bjorn Larsen to assist him in presenting Freedom Party’s own Mary Lou Ambrogio with Freedom Party’s “Free Speech Award”. McHale and Vandermaas have become well recognized for their efforts to call for just law enforcement in Caledonia. Vandermaas is also recognized for “Israel Truth Week” events that he spearheaded in response to the anti-Semitic, anti-freedom “Israel Apartheid Week”. When activists such as McHale and Vandermaas have found themselves being silenced by violence or wrongful arrest, or ignored by the media, Ambrogio’s efforts have connected them with sympathetic media such as Metz and Vaughan’s “Just Right” radio program, and with sympathetic organizations such as the International Free Press Society and Freedom Party. Ambrogio has been instrumental also in giving a voice in Canada to such controversial figures as Geert Wilders, Lars Hedegaard, Lars Vilks, and Ann Coulter. On behalf of Freedom Party, the Free Speech Award was presented by Mark Vandermaas, who read the plaque’s inscription aloud: “For her dedication to the promotion and defence of freedom of speech.”

Photographs and mingling followed the speeches. Many guests were not only impressed by the speeches and award presentations, but by the range of distinguished guests. It was a wonderful and memorable night for all.

The entire event was recorded on video. Freedom Party soon will be featuring highlights of the event on its popular youtube channel.