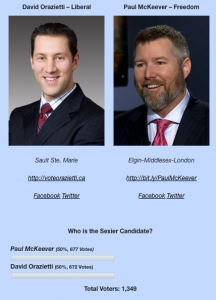 Round two of an Ontario “Sexiest Candidate” poll finds Freedom Party leader Paul McKeever pitted against Liberal MPP David Orazietti. McKeever was sitting pretty at 60% over Orazietti until Sault Ste. Marie media outlet sootoday.com put its resources into getting Sault residents to vote for Orazietti. The stakes in this (somewhat fun) poll are high: depending upon which of them wins this round, either Orazietti or McKeever will face off against Liberal Premier Dalton McGuinty in round three.

It is fully expected that, if Orazietti wins round two, McGuinty will have an easy win in round three, being the Liberal party leader. However, if those opposed to a McGuinty win vote for McKeever in round 2 and 3, McGuinty can be denied the title of Ontario’s sexiest candidate.

So, whether you’re a Freedom Party supporter, or a PC supporter, or a Green or NDP supporter, get out and vote for McKeever in round 2 and 3! Just go here: http://swingcatproductions.com/blog/ontarios-sexiest-election-candidate-2011/ and scroll down to cast your vote. The system allows everyone to vote again every few minutes, so vote early, and vote often!

Note: PC leader Tim Hudak is no longer in the race, and NDP leader Andrea Horwath is competing only with other women in the contest.