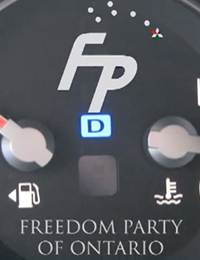 This election commercial was aired on Sun News Network during the Ontario general election of 2011 to promote the party’s 2011 election plank: Eliminate Ontario’s Gasoline Tax.

Transcript: “Ontario’s gasoline tax was introduced by the Conservatives in 1925. Last year, Dalton McGuinty started charging H.S.T. on gasoline. He even taxed the tax. Two taxes is too much. A Freedom government will eliminate the old gasoline tax. That will reduce the price of gasoline by 16.6 cents per litre. Fill ‘er up, with Freedom Party.”