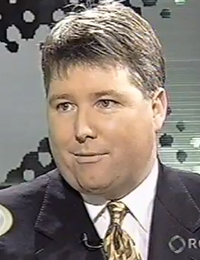 On November 27, 2002, Freedom Party of Ontario leader Paul McKeever was a guest of Jim Chapman Live. McKeever had been made leader of the party earlier that year, and Chapman wanted to find out more about McKeever’s plans for Freedom Party as the election of 2003 approached. Issues discussed included: electricity, smaller government versus better government, health care, education, and the Progressive Conservative Party of Ontario’s abandonment of common sense.