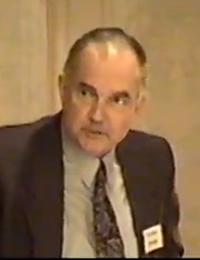 On December 3, 1994, Freedom Party held a dinner featuring speaker Gordon Domm: a retired OPP officer who had violated the publication ban that had been imposed on the Karla Homolka sex slayings case. This video includes that dinner, but also includes a summary of the events that preceded and followed the dinner. The summary of events – without the dinner footage – was produced by Paul McKeever. Titled “Helpless Homolka”, it is available on McKeever’s youtube channel (it runs approximately 10 minutes): https://www.youtube.com/watch?v=TnfM8zGMF0M

Watch, and see how radical leftist, feminist ideology was used to characterize Karla Homolka’s criminal activities as the act of a helpless victim of battered wife’s syndrome. Learn how a publication ban helped cover-up radical feminist attorney general Marion Boyd’s so-called “deal with the devil” until after the election of 1995.