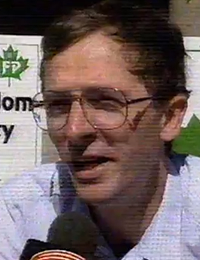 On August 22, 1993, Global news covered a “Marijuana Mardi Gras” event that was held that day at Nathan Phillips Square in Toronto. Freedom Party of Ontario, opposed to cannabis prohibition, was among the various groups promoting their respective organizations at the event. Freedom Party president Robert Metz was interviewed by Global, and explained the party’s opposition to prohibition.