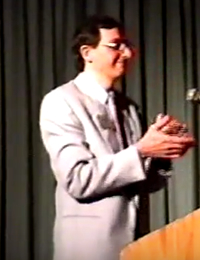 Titled “Horizons”, the workshop was led by Freedom Party of Ontario president Robert Metz. It dealt with abstractions vs. concretes, with the definitions of key terms (e.g., government), and with issues raised by attendees.

The dinner and the workshop were held at the Ramada Inn 401 in London, Ontario. They both were video taped almost in their entirety. Video clips were shown at both the dinner and the workshop, and those videos (with the exception of one titled “Dutch Treat”, which cannot be located) have been integrated into the dinner and workshop videos at the appropriate places. Clip in the dinner video: London nurses all candidates election debate (election 1990). Clip in the workshop video (Part 1): excerpt from “Debate ’94”, concerning which is the moral system, capitalism or communism (featuring Leonard Peikoff, John Ridpath, Jill Vickers, and Gerald Caplan). Clips in the workshop video (Part 2): excerpt from “Family Ties” (re: freedom of speech), and a TV London News item concerning Robert Metz’s allegation that the human rights complaint against London landlord Elijah Elieff were a cover for an attempt to seize the landlord’s buildings.

The video recordings are here broken into a total of 3 videos:

The dinner and workshop, together, can be viewed as a playlist here: https://www.youtube.com/watch?v=rSDZtq1lB1A&list=PLzGFp0rqLh9FqUxS-wkqQGJckDPZteY2L