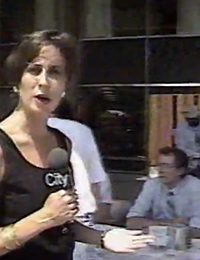 On July 19, 1992, Freedom Party of Ontario president Robert Metz gave a speech at a Toronto Marijuana Mardi Gras anti-prohibition event. The event was held at Nathan Phillips Square in front of Toronto City Hall. This news story about the event appeared later that day. Freedom Party had an information table at the event and Robert Metz is seen, at one point in the story, manning the table. A video of Metz’s speech – which was followed with a speech by Jack Herer (author of “The Emperor Wears No Clothes”) is available in the Freedom Party online archive.