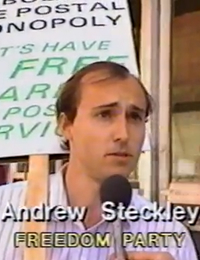 Violence by striking members of the Canadian Union of Public Employees made the news in the summer of 1987. Freedom Party of Ontario members picketed the Post Office in London, Ontario to protest close shop unions and the violence associated with strikes by them. TV London News was there to report it.