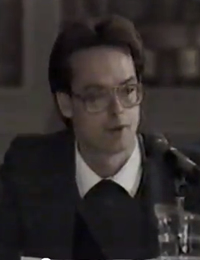 On February 25, 1987, Global TV did a news story on Marc Emery’s and Robert Metz’s submissions to the London meeting of the Select Committee on Sunday Shopping. Business owners testified that they wanted Ontario’s ban on Sunday shopping to remain in place. Only Emery and Metz were heard to call for a repeal of the ban.