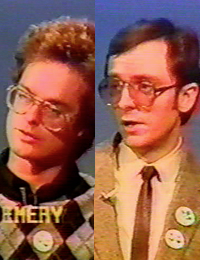 In 1984 and 1985, Freedom Party of Ontario’s Action Director, Marc Emery, and Freedom Party’s president, Robert Metz (who also was chairing the No Tax for Pan Am Games Committee), campaigned against a bid by London business persons to have taxpayers foot the bill to have London, Ontario host the 1991 Pan Am Games sporting event. On London cable television, host Stan Hall interviewed Emery and Metz about their efforts.