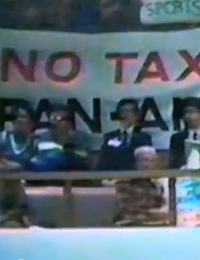 In this cablecast and newscast from December 3, 1984, Freedom Party supporters, organized as the No Tax for Pan Am Games Committee, are seen holding up signs (at London City Hall, during a council meeting) in opposition to London using tax revenues to pay for the hosting of the 1991 Pan Am Games. This recording ends with snippet from a separate newscast that was recorded on the same video tape.