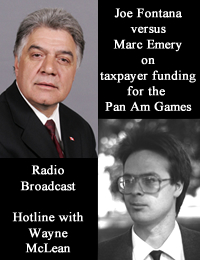 In July of 1984, then Freedom Party of Ontario Action Director Marc Emery, together with volunteers from the Freedom Party of Ontario, went door-to-door distributing a letter opposed to taxpayer funding for the Pan Am Games. A local contingent of businessmen and municipal politicians had tendered a bid for London, Ontario to host the 1991 games, and the bid included a budget in which taxpayers would be stuck with picking up the lions’ share of the tab. Emery had submitted his letter to the local London Free Press, which had declined to print it. After Emery’s letter was distributed door-to-door, a No Tax for Pan Am Games Committee was formed, which published a number of newsletters to keep opponents of taxpayer funding for the games aware of developments. Ultimately, in early 1985, Emery and Freedom Party were successful: thanks largely to their organized opposition to taxpayer funding for the games, public outcry against public funding for the games ultimately resulted in Canada’s then federal Minister of State for Fitness and Amateur Sport, Otto Jelinek, issuing the announcement of a 5 year freeze on taxpayer funding for sporting events. The London bid was dead. The 1991 Pan Am Games were held in Cuba, at the expense of Cuban taxpayers.

Note: This audio is captured from a cassette tape. The recording on side 2 of the tape suffers from speeding-up and slowing down of the tape that appears to have been caused by variable slowing of the tape reel during the recording of the broadcast (the tape, itself, is not stretched or creased or otherwise damaged and the cassette mechanism moves freely). This digital capture plays side 2 continuously after side 1, such that the audio irregularities are heard during the second half of the recording.