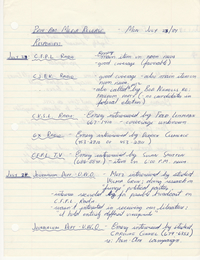 Freedom Party president Robert Metz kept track of the responses generated by a July 23, 1984 media release, which included a copy of Emery’s letter and explained that it would be distributed to 20,000 doors in London. These are Metz’s notes re: responses that were generated.