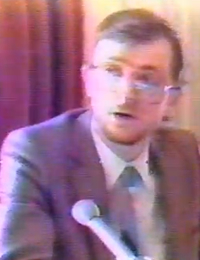 In the early 1980s, members of a radical feminist group called the London Status of Women Action Group sent out a letter to London businesses falsely claiming that child pornography was being sold at stores in London. When a federal commission on pornography and prostitution (the Fraser Committee) held a hearing in London, Ontario on February 9, 1984, Freedom Party president Robert Metz and Freedom Party action director Marc Emery testified. Emery offered $500 to anyone who could find child pornography being sold in a London store. Nobody ever claimed the money. The “child porn” false allegation was being used in an effort to censor adult erotica magazines.