“…The real and important issue here is who has the power to choose what happens to privately owned land: the government or the people who own the land? I side with the landowners…” [Click here to read the full release] 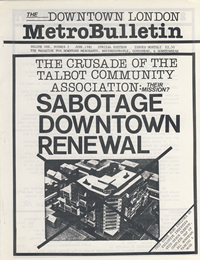 Contents of Issue #2:
We’re back; Exclusive interview: the mayor, Al Gleeson; Downtown in 1986: Wow!; B.I.A. Report: Mall experiment delayed until next year; Eyesores; Crime and punishment: Allan Singer has been taken to court for conducting his business in English; Core area sabotage; Manual for starting a “Community Assoc.”; Random notes; Downtown parking: Plenty of it!; Random notes on parking; An interview with the President of Alcor Investments: ‘Bullish on downtown’; Letters; Bids to restrict competing businesses decried.
END_OF_DOCUMENT_TOKEN_TO_BE_REPLACED