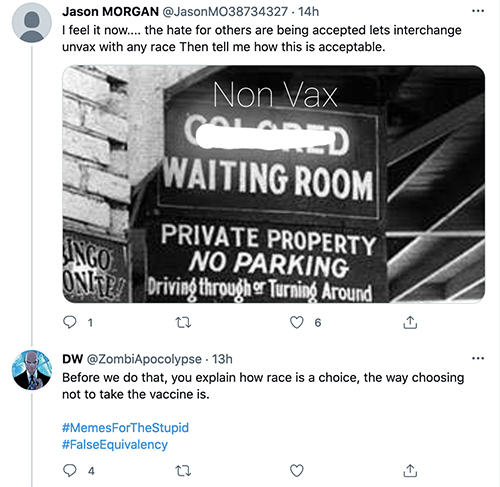 On July 27, 2021, I published on the Freedom Party of Ontario’s website a position paper concerning decisions by some providers of goods or service to deny service to those who have not received a Covid injection, or to those who have had one (see https://freedomparty.on.ca/archive/2021/07/27/for-freedom-outlaw-covid-19-vaccination-discrimination-now/). For reasons there explained, I asserted that governments must ban the practice. In what follows, I deal with one of the more common and faulty or disgusting responses I received to that article.

The response was not novel. It can be found in countless arguments about why governments ban discrimination on one basis, but not on another.

“The reason the government bans discrimination on the basis of X, but not on the basis of Y, is because X is something over which one has the power of choice, but Y is not”.

With respect to the Covid injection issue, the response I received was that there is nothing wrong with discriminating against people who have not been injected because – unlike, say, a person’s “race” – a person has the power to choose whether or not to take the injection. Implicit in that argument is the mistaken assumption or assertion that human rights laws are meant to protect only things over which one has no control, and not things over which a person has a choice.

There are two major problems with that position.

What does that position entail? It entails a belief that “A person should not be held to be at fault for the things it is impossible for him to change”. That, in turn, implies that “If a person is discriminated against because of a thing over which he has the power of choice, the discrimination is due to the person’s own choice; the chooser is the only one to blame for the discrimination he faces as a result of not changing something he does have the power to change.” On this line of thinking, the female who is discriminated against because of the colour of her skin, or because of her age, or because of her sex, would not deserve any legal protection were she to have the power to change the colour of her skin, her age, or her sex.

In other words, a person who thinks discrimination should only be banned with respect to the unchangeable/unchoosable thinks that the law only bans the discrimination because you are ‘stuck’ with your skin colour, or your sex, or your age (or some other thing over which you have no power to choose). In other words, such a person thinks that the law bans such discrimination only because – as examples – “it’s not your fault that you’re black”, or “it’s not your fault that you’re female”, or “it’s not your fault that you’re old”. Such a person implicitly takes the position that there is something faulty or shameful about having “the wrong” skin colour, or “the wrong” sex, or “the wrong” age, but that the law should protect the poor folks who are unable to choose a “better” skin colour, the “better” sex, or a “better” age. Such a person wants a law that acts out of pity for your unchosen alleged plight.

Such collectivist prejudice is the exact thing that human rights laws were made to combat. Human rights laws are not made, out of pity, to protect people for unchosen faults or shame. They are made to reject the notion that there is anything inherently faulty or shameful about a given race, sex, age, sexual orientation, gender, disability, etc.. Human rights laws ban discrimination on those grounds not because people lack the power to change those things, but because every individual should be treated as a human being, irrespective of the individual’s race, sex, age, sexual orientation, gender, disability, etc..

Accordingly, the argument that one should not ban denial of service to those who have not received a Covid shot (or to those who have) because one can choose to get (or not to get) the shot is a flawed and deeply offensive one. That a person has or has not received a Covid injection is not an acceptable basis for refusing to treat a person the same as every other human being. The “we shouldn’t ban it because you can simply get the shot” position is a dehumanizing one that misrepresents the purpose of human rights laws, and that actually gives a pass to collective prejudice. Those who use the argument should be corrected, if not also verbally condemned, for doing so.

{The author, Paul McKeever, is the leader of the Freedom Party of Ontario}