“Freedom Party of Ontario announced today that Tim Hodges has been nominated its candidate in the riding of London West for the October 6, 2011 provincial election…” Click here to read the full media release.

“Medicare is failing Ontario’s sick and injured because it was never intended to be a system focused on making them well. So argues the father of Medicare, Tommy Douglas, in a short new Freedom Party of Ontario pre-election video titled “From the Horse’s Mouth: Why Medicare is Failing Ontario’s Sick and Injured”. The video is being used to promote a 2011 election plank released today by Freedom Party of Ontario…” Click here to read the full media release. 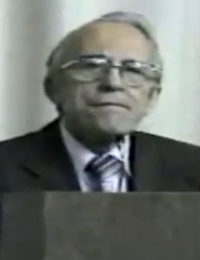 Ontario once had a health care system that focused on making the sick and injured well. On October 1, 1969, Ontario’s Progressive Conservatives banned that system and replaced it with Medicare. This video features the father of Ontario’s Medicare system, Reverend Tommy Douglas. Watch this video and, in just 4 minutes and 23 seconds, your beliefs about Ontario’s Medicare system are sure to be changed. Medicare was never designed to be able to focus on making the sick and injured well: from the outset, it was known that the best Medicare could afford to do was to focus on keeping the healthy healthy. A Freedom government will restore the health care choices that Ontario’s Progressive Conservatives banned in 1969, so that we can return to a system that focuses on making the sick and injured well. END_OF_DOCUMENT_TOKEN_TO_BE_REPLACED 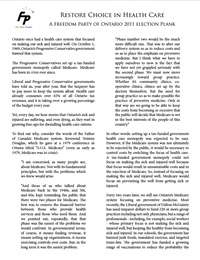