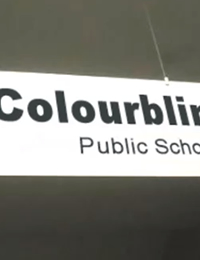 2. Toronto’s Africentric School. Transcript: [CTV]: “Late last night, the Toronto District School Board approved a controversial proposal to create the city’s first black-focus public school”. [Paul McKeever]: “In 2008, the Toronto school board decided to establish a black-focused public school. Liberal Premier Dalton McGuinty refused to stop it.” [CTV]: “…but he is not taking any action to stop the board from establishing the school”. [Paul McKeever]: “Tim Hudak’s Progressive Conservatives did not object to it. The school now teaches little children that their potential, and their values, are determined by the colour of their skin. A Freedom government will eliminate race-based public schools.” [Jordan Manners’ mother, Loreen Small]: “This black school thing: no, it ain’t right”. [Paul McKeever]: “One race, the human race. Freedom Party”.

3. Ayaan Hirsi Ali. Transcript: [Paul McKeever]: “Ontario’s public schools should not tell children that this woman is among the worlds most important black advocates of reason.” [Ayaan Hirsi Ali]: “…as opposed to leading your life according to a set of so-called divine ideas”. [Paul McKeever]: “They should tell children that she is among the world’s most important advocates of reason.” [Ayann Hirsi Ali]: “Life is an end in itself…the freedom of the individual goes above anything that any god can say.” [Paul McKeever]: “A Freedom government will eliminate race-focused public schools in Ontario. One race, the human race. Freedom Party.”