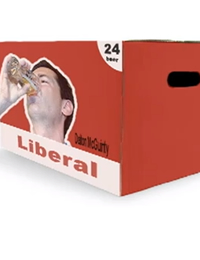 Transcript: “On Canada Day, 2010, the Liberal government of Dalton McGuinty quietly introduced the B.S.T.: a tax only on beers brewed in Ontario. There’s no B.S.T. on imported beer. A Freedom government will eliminate the B.S.T.. That will knock as much as five dollars and seventy-six cents off the price of a case of the many fine beers brewed right here in Ontario. Freedom Party. No B.S. …T.”