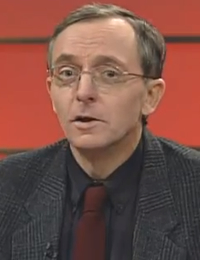 On November 24, 2006, Freedom Party of Ontario president Robert Metz and Bhagat Taggar (Human Rights Commission of Ontario) were panelists on “On the Line” with host Christine Williams. In this episode, the panel discusses Seinfeld star Michael Richards’ on stage comedy act in which he used the “N-word” at hecklers; is our political focus on the environment a result of being too happy to look at “real” isses?; immigration in Canada.