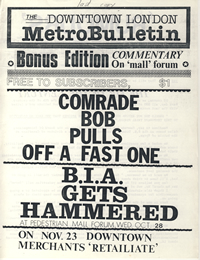 Contents of Bonus Issue #4.5:
Comrade Bob pulls off a fast one; Just who supports the B.I.A.?: Given a free choice, almost no one; Letters to the editor of the London Free Press.